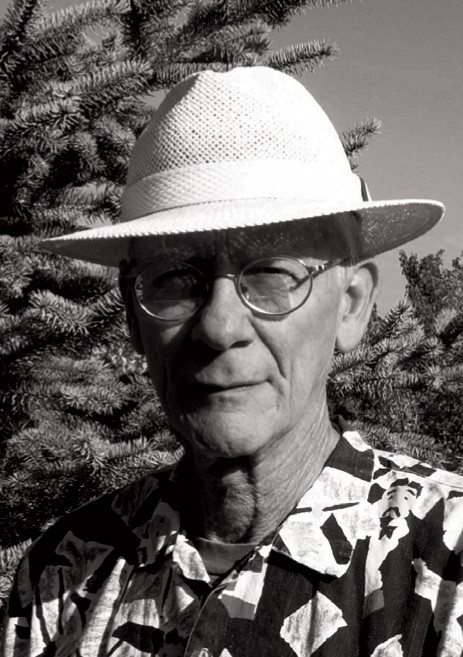 Where does time go, out the river flow
as life turns over and recedes . . .

There was Betsy, her twin sister wealthy – but not Betsy – did they even speak or see each other, because she was married to Kell D. Robertson, Jr. – and little Amy, in Albuquerque out on 12th Street just north of Lomas. “Come on everybody break free – from reality,” it says on KRST now Twenty Twelve, and it was the same back then, Kell in the bathtub soaking, beer cans and one full one lining the bath tub. Sometimes I wondered if anyone ever ate, the drinking went on so long, the backyard out there full of Coors beer cans.

And there was the pleading that went on for hours, “Kell why don’t you sing, hey Kell, why don’t you sing” and when you did if you did the voice crackled of Hank Williams and Woody Guthrie but with a perverse twist now and then in your own songs, your copy of Guthrie’s Bound for Glory well dog-eared. Or sometimes your guitar would be out in the car and even when someone got it the drinking would go on but not the singing. But there would be jokes and mutual poet friends Gino Sky and Ken Irby – Gino and Brenda in Santa Fe, Ken Irby on Gavilan Place off of 4th Street, and Mel and Beverly Buffington off of Central at UNM, and Lora Linsley with her home in the North Valley open to poets after reading, Lebanese food filling our stomachs, a bit of glitter sparkling down from her fingertips onto the carpet where we sat, and then later out on 4th Street, Roxy Gordon and woman, someone else and woman, and talk of guns as I sat befuddled, drinking, and Kell and them outside shooting their pistols in the air. I left that strange quasi-toughness and pop-art decor. And there was also Ann Quin the British novelist and there was Judy Grahn, poet and women’s activist, friends of yours here.

But when you lived at the Thunderbird Bar in Placitas working and hanging out with Big John, AJ we called him, John Nordstrom, there was the best jukebox in the Southwest from Bix Beiderbecke to the Stones, and Kell singing between bartending and cleaning up. And behold! the time you opened for the great Lightnin’ Hopkins, one of your idols, at the Thunderbird.

That time at the General’s place where I care-took just outside Placitas up against the mountain you were singing talking singing and Bobbie Creeley (Bobbie Louise Hawkins), a singer herself, raised in West Texas, was really taken by it out on that rock overlooking the Jemez, the Nacimiento, the River Grand, and inside Bob Creeley looked at me with steely eye assessing the entire party scene as his dislike for Kell filled the room. When Kell took up with “the hippy chick,” as he called her, Cindy from a Placitas commune, Lenore and I went to dinner there in Bernalillo. We all sat around while that meatloaf (Lenore thinks it might have been chicken) was in the oven, we getting hungrier and hungrier, but beer and time went by till it was discovered Cindy hadn’t lit the oven and Kell took his gun and took off for the bar, so we left hungry, Lenore permanently disgusted at Kell’s drunken concentration camp joke.

but now, Kell, time doesn’t stretch
all the way to dawn –

When I got to San Francisco, Kell was living on 7 Coleridge Street, or was it 24th? and we drove to our reading, I drank that hard liquor I hardly ever drank and you sang alright and read those cowboy beatnik funny savvy poems but I was in Rio Grande fanged goddess drag bowing drunken to civilized San Franciscans all relentlessly on video tape – thanks Kell! And then when I changed for the next poem the place was vacated as I stared drunk at the emptied coffee house. But here in Placitas at the Thunderbird on that patio watching the sun go down with 10 cent beer Kell would read or sing that funny song about her tongue going in his ear and I was in the height of my mask and ceremonial objects and scrolled handmade poems.

Many years later, lots of letters back and forth, Silva’s Saloon & Historical Museum in Bernalillo was open to readings for a series Marianne Davidson & Laurie Macrae and I set up and Kendall McCook and Kell set up and read, the last one we read together, with of course others, but I left early since I’ve been sober since 1995 and the Dr. Jekyl & Mr. Hyde of heavy drinking I could no longer tolerate as Kell’s sexism and other isms came out and the reading was fractured and all too self-conscious. When our friend Tom Nordstrom, Big John’s son, died of extended cheap beer I saw Kell escaping the service at the Presbyterian Church, beer in his hand, “I had to get away,” he said. We had one long phone call not too long ago, warm I thought for we have a long mutual respect and wonder at our different paths.

But the last call from Kell was, we are old friends and we deserve to talk together – which we never did – more than that.

Kell, time doesn’t stretch
all the way to the dawn –

You and your Desperado magazine and The Prod (legal size page of favorite quotes & diatribes) were part of the mimeo revolution where we cranked out poetry and our stencil drawings right at the kitchen table. You were the arch vagabond, starved for publication life-long and some recognition, warm and caring on the inside, funny as hell on the outside and insistent to keep up your image with the hat, the mystery, when were you born we wondered, and that continued defense of the politically incorrect was your norm, gifted soul spurned by UNM Press of course, as that press ignored Judson Crews and New Mexico‘s greatest poet of all time – Keith Wilson, and, not so humbly, yours truly.

Kell, time doesn’t stretch all the way to dawn
or did it, does it, or are we there now.