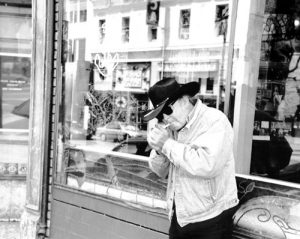 I’m listening to Kell Robertson sing When You Come Down Off The Mountain. His voice sounds like his throat has been sandblasted raw, gravel over gravel, bourbon through phlegm. The second he sings the line, Just remember, you gotta die, it hits me that this strikes right at the core of what Outlaw Poetry is really all about. Or, maybe any poetry that is worth a damn. It’s all about writing full throttle under the constant sentence of death. Or, at the very least, of being down and out in the american southwest.

Robertson sings almost everything off key or at least it’s off the key that I’m used to. Call it a Kell Robertson form of the duende. But, he more than makes up for it in the authenticity that he brings to the music. And, he more than makes up for it in the originality he brings to his poetry. Kell Robertson has been writing poetry since the 1950s. Nobody knows just how much poetry he has written since then. The work that has survived his legendary walk and ride abouts in america, the poetry that survives in difficult to find chapbooks is small compared to the work of Bukowski, Micheline, or Ginsberg who were close contemporaries. Robertson may have a published legacy of perhaps two hundred poems in all. Not much more than a Constantine Cavafy or a Weldon Kees.

In both published and unpublished interviews and private correspondence, Robertson has admitted that he considers himself lucky to write ten poems a year, if that. Personally, I can write ten poems a day. But, that isn’t the point. The point here is the quality of the work that is produced. And, the quality of much of Robertson’s work is first rate. However, it isn’t just first rate. It’s unique. It’s extraordinary because it is so originally and wonderfully primitive.

And, here I used the word primitive as a compliment. When I say primitive, I also invoke the word primal. Because it is primal in the very best sense that any primal work of art is important. A primal poem, like a primal painting calls down all the powers, conjures all the nightmares, completes the circuit for passion, longing, terror, and dreams. This is the area that Kell Robertson writes out of. This is where he has been. This is what he knows best.

This morning Teresa sleeps
in the doorway of the plasma center.
Teresa of the rotten teeth
and sweet smile. Teresa
of diseased sex and raped dreams.
The cops can’t arrest her because
she’d infect the other prisoners
and no social service will touch her.
She blows winos for drinks of cheap wine
and screws anyone for a glass of beer.
and a quarter for the jukebox.
Her grin is black, the stumps
of her teeth framed by scarlet lipstick.
She told me once
how she wanted to dance
dance into the grave
with music coming out
of every hole in her body.

Almost twenty years ago I sat in Kell Robertson’s kitchen up in Raton, New Mexico. That was back in 1992 when he had an apartment and a kitchen. DILLINGER: BOOK ONE from Primal Publishing was on the table between us. I’d just written something in the copy for him. I could tell that he was uneasy with it sitting there. He took a hit of vodka right out of the bottle, touched the book, then looked at me. The look was a mix of rage and pain and drunken envy. Suddenly he pushed the book toward me and said, Hell, you have John Dillinger and I have John Wesley Hardin. Then he leaned forward nearly dumping the ashes out of an ashtray on the table. The book on Hardin’s all up here he said pointing at his eyes. I got it here but when it comes out, he paused. It’s really gonna be something. All I gotta say is watch out. Then he settled back into his chair, took another hit of vodka, smiled and said, Lets get some guns, go down to Mexico.

“This is a bullet hole
made by
Billy the Kid”

The gun dance
a dance to death
like all magic
dangerous to play with.

Because Kell Robertson was born in 1930, he is a product of the Great Depression. His was a hard scrabble childhood. Born in Dustbowl Kansas, raised by a stepfather who shot pop bottles off his head for the hell of it, Robertson was already on the road by the mid forties. Which meant he grew up listening to all the best talking. His stories were also my stories because if you were raised on the flip side of T. S. Eliot andRobert Lowell, the stories you read were really the stories you heard. Maybe along the railroad tracks or in a bus depot or by the side of the road or out behind some skidrow hotel. The one thing you could count on was that these were the kinds of stories that had blood in them.

A blue pickup
bounces along
dust rising behind it
up the wide canyon
into the dark.

Two Indians, drunk
reel to the top of a hill
watch until
the blue spot is gone,
laugh, punch each other in the mouth
celebrate the end of anything.

From A HORSE CALLED DESPERATION.

On a first reading, Landscape, New Mexico comes across as a bit of local New Mexico. Strictly lightweight, almost satiric. It has hills and mountains and canyons and pickups and Indians. All the usual suspects for a local color poem. This could be something right out of a Max Evans novel, except that it’s not. The second time you read it, you get it. This is not one more evocation of the Land of Enchantment. Instead, it’s about being so far gone, so drunk, so catastrophically lost that a punch in the mouth is just something to laugh at. It’s a celebration of “the end of anything.” It’s really a celebration of the end of everything.

“Check out time is one P.M.”
they shouted and broke down the door
but all they found there
was a dead coyote
glistening
as if it had run for a long way
a long time.

From A HORSE CALLED DESPERATION

This poem grew on me over time. At first it seemed slight, almost coyote gimmicky. But after awhile I realized that this is a kind of abbreviated Kell Robertson bio. This is what should have been printed in the bio sections of all the journals and zines Robertson ever appeared in. And, now, every time I see NO COUNTRY FOR OLD MEN which was filmed in one or two of Albuquerque’s old Central Avenue hotels, I think of this poem and am reminded of the fate of the poet in america. The dead coyote is all that’s left of the poet. His eyes have all morphed back into the poems.

Of course, there is that other Kell Robertson extreme. The image of the gunfighter. Maybe it’s the way Kell has always wanted to see himself. Empowered, armed and dangerous.

seeking death
is always ready
for yours
mine
even his
(although he doesn’t consider that
much of a possibility)
His gun is loaded
always
strapped in place
just so
he can get it
& fire it
(he never aims, he points)
as easy as
sitting down
or taking a leak
behind the tavern
If he is a saint
he is a deaf one
If he is a god
he is blind
& if he dies
he’ll shit all over himself
even as you or I
but while he lives
he’s clean
clean.

From A HORSE CALLED DESPERATION

Both The Passionate Coyote and The Gunfighter form a kind of Kell Robertson psychic biography. A powerful western mythos. The Passionate Coyote is Robertson’s realistic take on who he is. Don’t let the coyote image fool you. This is Kell Robertson taking a close look at himself. The poet’s genius lies in his ability to shapeshift from man to coyote and back again. In fact, that is his poem. And, it doesn’t matter if you die in a rundown motel. At least, you were able to shapeshift those jokes you told to a cracked mirror into something more than the sordid surroundings where you died like an animal. Then we go from that vision of the poet to Robertson’s take on the poet as Gunfighter. The Gunfighter survives as a force unto himself. He’s strictly a loner and is fast on the draw. And, he knows it. He also knows that some day he will die but he will do it “clean.” Just as a Hemingway hero will know how to die alone and with grace. Like John Wesley Hardin. Like Pretty Boy Floyd.

Kell Robertson has somehow become the prototypical outlaw of Outlaw Poetry. And, what he brings to Outlaw Poetry is a primal and passionate sense of all the old stories told around freight cars and old trucks and bonfires and barn stalls. This is something that can’t be taught in writing schools because the old storytellers are almost all gone. The old talking is also nearly gone and you can’t fake it back, you can’t dance it back, you can’t dream it back any more than you could fake a velada by Maria Sabina. The wind has blown a lot of that old talk away. You might catch a few riffs like Robertson’s in some of Bill Hearn’s songs or in maybe William Faulkner’s The Bear or in the best parts of John Steinbeck’s THE GRAPES OF WRATH. And, while Kell Robertson’s body of work may be small compared to the large output of other poets, what he has written and what has survived of his work in chapbooks like Regular Grinding and Bear Crossing and in his masterwork A HORSE CALLED DESPERATION, is the classic essence of what it means to be an outlaw and a poet in post 911 america. This is pure blood primal, the stuff that the great american dreams and nightmares and stories and poems are made of. 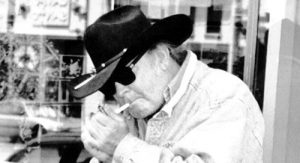 published by Dave Roskos’ Iniquity Press/Vendetta Books, is a compilation of three of Robertson’s early chapbooks – Toward Communication, Between Standing Up And Sitting Down, and Outlaw Fires. Roskos is one of the really fine small press editors, the kind of editor necessary to keep the small press vital and viscerally real. This chapbook consists of 3 out of print chapbooks by Kell Robertson. His first 2 books from the 1960s, which were published by Ben Hiatt on his Grande Ronde Press, & Outlaw Fires, which was published by Tom Kryss, on his black rabbit press, in Cleveland in 1989. There are 20 copies of this chapbook with black covers w/ art attached; 11 copies w/ white covers w/ art attached; & 96 copies with tan covers. January 2009. all rites belong to Kell Robertson.ISBN-1-877968-43-9 Silk sreened front cover art by Tom Kryss.

In memory of Ben Hiatt.

I did write you some stuff about Ben Hiatt didn’t? He was the first guy who really believed in my poetry. Got me started on my magazine…DESPERADO. Anyway man, give him credit for that. Maybe I should dedicate it to all the folks who gave me a shot with my writing. There have been damn few over the years. All the “fugitive” publications. And I’m honored to have Kryss doing the cover. Ride Easy. — Kell Robertson, November 20, 2008

todd moore | into the open madness: the poetry of kell robertson