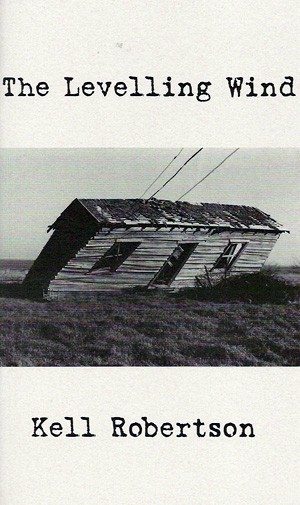 I have to level with you—I’m not familiar with Kell Robertson’s earlier works. I’ve seen a short interview with him and a few scattered poems here and there, but for the most part I come to The Levelling Wind with little previous knowledge of his work or prejudice about it.

That said, I’m here to testify to the power and emotion generated by these twenty-seven poems, personal accounts or perhaps fantasies from an aging cowboy poet who is appalled at what the world has become. Robertson’s title comes from a quote by William Butler Yeats, but Robertson’s poems are as far as you can get from academe. These are gritty accounts of life lived at ground level—in bars, cheap motels, in the saddle, the nursing home, the death chamber.

He begins, in “Return,” with the lines I’m turning into a language/ forgotten a million years ago and concludes that that language is incomprehensible to me/ and crazed to everyone else. In a longer poem, “The Old Man Goes Home,” he talks about visiting the place where his granddad’s Kansas farm once was, now a shopping center: all this asphalt and concrete/ plastic and steel. The security guard asks, what I’m doing here if I’m not/ going to buy anything.

Robertson is also described as a singer-songwriter and four of the poems included here are titled simply “Song.” The first invokes Hank Williams’ barroom blues and concludes all of the noises heard in the dark/aren’t imaginary. The second begins I heard a song once/ out of the wind of a Kansas prairie but a happy song it’s not, and Robertson concludes it never stops blowing/ a hard wind through/ what’s left of me now. That wind also blows through the other two songs.

There’s a bit of grim humor in poems like “Easter 1983” and “Compassion Is No Longer” but for the most part Robertson is deadly serious as befits his subjects. In a four-page prose poem Robertson describes life in a homeless shelter at Christmas time—more grim humor but also a reflection of his determination to carry on no matter what hand he’s dealt. He concludes with five “Mountain Songs,” the last of which begins like Yeats I’d sing in my bones/ as age turns them brittle and ends with the hope he’ll wear a grin/ and a foolish look, leaping/ for the love in myself/ and the senseless rabbits.

The Levelling Wind is a series of level-headed looks at life on the street and in the saddle, a sometimes bitter look at how the world has changed for an old cowboy poet. I guess I can identify with that, not as a cowboy, but as another aging poet who despairs at what the world has become. Despite all that, Kell Robertson is a gifted poet and The Levelling Wind is a highly recommended read. by Neal Wilgus