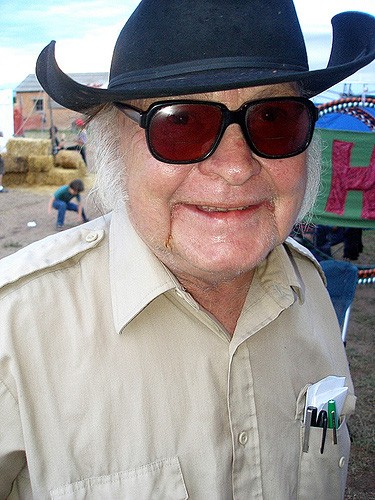 The front room of Santa Fe’s Cafe Oasis is full, though few of the diners appear to have come for the musical entertainment. Kell Robertson, a crusty, round-headed leprechaun in sunglasses and a cowboy hat, climbs up on the tiny raised platform that functions as a stage. Guitar in hand, he takes his place on the stool and starts picking a slow blues. Then he starts to sing. It’s a high-pitched rasp that becomes an eerie wail as he launches into an improvised tune he says is based on an old song by Richard “Rabbit” Brown, a New Orleans songster known for celebrating killers, gunmen and mayhem.

“Because I’m evil,” the 74-year-old Robertson howls in the refrain. You can’t see his eyes for the shades, but his expression looks stern. After musically bragging for several minutes of how cruel and callous he is, Robertson, mindful of the clientele at this hippie-owned-and-operated landmark of New Age Santa Fe, he sings,

“I’m gonna take all your organic sandwiches and throw ‘em in the woods and make you eat bologna/Because I’m evil!”

A few Oasis diners leave before finding out whether Robertson is serious about making them eat bologna. But others more interested in the music take their place, and soon the crowd is Robertson’s.

A poet and self-described “old drunk,” Robertson has lived the life he’s written about in his songs and poems. “I’ve always thought that my biography is in my poetry and songs,” he said during an interview at his home, a converted chicken shack on the property of a friend southeast of Santa Fe. Chain smoking and drinking the better part of a six-pack of Pabst Blue Ribbon, Robertson talked about his life.

He was born in 1930 in Codell, Kansas, the son of a saxophone player who abandoned the family when Kell was a toddler. His mother remarried a man who kicked Kell out of the house at age 13. He’s been rambling ever since.

He’s earned a living as an usher in a movie theater, a fruit picker, a dishwasher, a soldier in the Korean War, a disc jockey at country and jazz stations, a bartender, and an insurance salesman. At one point, he says, he took classes at a police academy in California before deciding against a career in law enforcement. He even cooked at Cafe Oasis a few years ago.

Robertson has been picking and singing and writing his songs for decades now, ever since having an epiphany as a youth when he saw Hank Williams play in Louisiana. “It turned my head around,” he remembers. “I realized that I don’t care what I do with the rest of my fucking life, I’m going to do that or try to do it. I’m going to do what he does, somehow.”

However, Robertson, a notorious mainstay of San Francisco’s North Beach scene in the 1950s and ’60s, is far better-known in poetry circles than he is in the music world. He published a mimeograph poetry magazine called Desperado in the ’60s and has issued seventeen books of poetry.

“I would say Kell Robertson is one fine cowboy-poet, worth a dozen New Yorker poetasters,” Lawrence Ferlinghetti once declared. “Let them listen and hear the voice of the real America out there.” Robertson cringes at the thought of being called a “cowboy poet” — though he did include Ferlinghetti’s quote on the back cover of his latest CD, When You Come Down Off The Mountain.

Though Robertson’s music always has been an important aspect of his art, he didn’t release an actual album until 2002, when some friends surprised him and put together twenty songs Kell had sent them through the years recorded on cheap cassettes. Despite its lo-fi quality, Cool And Dark Inside is timeless; it sounds like a long-lost field recording of some desert-rat minstrel.

The most memorable tune is the title song. Robertson got the phrase “Cool And Dark Inside” from a sign for a Phoenix beer joint called the Igloo Bar. As the song proceeds, “cool and dark inside” transforms from a promise of relief to a metaphor for death.

After that first album, a friend set Robertson up to make another. Though it was recorded in an actual studio instead of on cassettes, When You Come Down Off The Mountain retains the ragged quality of the first disc. It mixes original songs with a couple of covers — “Jole Blon” and “Have I Told You Lately” — and some spoken word tracks, including Robertson’s poem “A Horse Called Desperation”.

On the last track, “I’ll Walk Around Heaven With You”, the singer confesses, “I’ve told some stories, honey/Most of my stories aren’t true.” But on “I Always Loved A Waltz,” in which Robertson sings his own epitaph, the words have a definite ring of truth.